Title: Impact of a novel low-sodium diet intervention on blood pressure and fluid retention in CKD patients with metabolic acidosis treated with Na-Bicarb

Background: Metabolic acidosis (MA) is a disorder that occurs when the body produces excessive amounts of acid, the kidneys are unable to remove enough acid produced from normal metabolism; or the body loses too much bicarbonate ion (HCO −). MA is a frequent complication of advanced Chronic Kidney Disease (CKD) and is associated with accelerated declines in kidney function. Sodium bicarbonate (NaHCO3) supplementation is often provided to patients with CKD to treat metabolic acidosis, but the sodium load from this treatment (~550mg Na/day) may increase blood pressure and fluid retention.
A common strategy used to prevent high blood pressure is counseling patients to reduce their dietary salt intake. However, counseling patients to reduce salt intake is often ineffective because salt is so prevalent in food, especially highly processed food. A recent study in patients with heart failure showed that delivering low sodium meals to participant’s homes (from a commercial vendor) may be an effective strategy for reducing their dietary salt intake.

Our central hypothesis is that changes in blood pressure and fluid retention induced by NaHCO3 supplementation will be attenuated in patients who reduce their dietary sodium intake through the provision of home-delivered, low-sodium meals, in combination and additional low-sodium education. Moreover, continued dietary counseling and education support will result in a sustained reduction in sodium intake after the meal delivery is stopped. Our rationale for this approach is that the benefits from low-sodium counseling alone in CKD patients are slow to manifest and patients struggle to translate education to their daily habits, resulting in poor compliance. By contrast, providing patients access to low-sodium meals may result in significant short-term benefits that may alter patient’s preference for sodium, model appropriate low sodium food choices, motivate patients, and improve their self-efficacy to sustain dietary changes.

The objectives of our study are therefore to determine if reducing dietary sodium intake mitigates increases in blood pressure and fluid retention in CKD patients prescribed NaHCO3 supplements to prevent metabolic acidosis and to also determine if benefits from the short-term (3-month) provision of low-sodium meals can be maintained through continued dietary education after meal delivery is stopped. 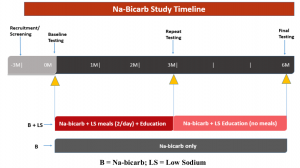 Study Overview: A comparative effectiveness trial in which CKD patients with metabolic acidosis will be randomized to one of two groups: 1) Control (B) usual care and prescribed sodium bicarb supplement; or 2) Intervention with prescribed sodium bicarb (B) supplement + Low-sodium (LS) meal feeding. All patients will consume their prescribed sodium bicarbonate supplement as prescribed by their physician (1.95g/day) for 6 months throughout the study. B+LS also will have two low-sodium meals/day (14meals/week) delivered to their homes for 3 months (3M), and receive educational materials throughout the study regarding how to reduce dietary sodium intake. The 3M testing is designed to assess the short-term impact of low-sodium meal provision and education on our primary (blood pressure and fluid volume/retention) and secondary outcomes (salt taste sensitivity, preference, and knowledge, and self-efficacy). The 6M follow- up testing will allow us to evaluate if providing meals to patients for three months with continued education can help “prime” sustained changes in dietary behavior.